Much work went into the game since the last update. Some of this will require a longer post to be explained. I'll post here some screenshots relative to the more recent work that is more clearly visible.

Here's an image of the latest digital display that represents pretty much all of the avionics GUI in the plane.
The display is heavily based on that of the F-35, as seen on public displays of simulators of the airplane. 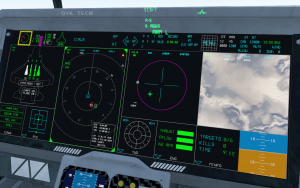 The display is divided in 2 screen halves, each of which can contain 2 vertical windows or panels, each of which can have 2 child windows at the bottom.
The F-35 windowing system leaves some room for reorganization of the layout, something which I haven't yet implemented, but that will come eventually.

Some of the windows in display are at least partly functional. Left to right, the Store Management System (SMS), the Tactical Situation Display (TSD), the Forward Looking InfraRed display (FLIR) and a generic map display, which will have to be replaced.
The SMS has received some cosmetic improvement, while the TSD received the bulk of recent improvements.

The TSD has now a cursor that can be used to select a potential target, zoom on the area to determine if more targets are overlapping, and then designate a target to be shot. This is especially important for ground targets, which are usually planned early in a mission.

The FLIR display is not active in the screen shot but, when active, it produces a pseudo-IR zoomed view of selected target for visual confirmation both when designating a target and later, after the target is hit, to asses the damage.

The general display quality was also increased, both in terms of resolution and by increasing the number of MSAA samples.
The game uses MSAA anti-aliasing, both for the final rendering and for the rendering of the cockpit displays. This is important because if we're to simulate actual instrumentation with the right proportions, then we also need extreme clarity of display.